From late August and throughout September, KnowNow Information trialled the first five prototype sensor packs, built in conjunction with our partner and using Raspberry Pi. They are designed to deliver precise real-time and historical readings of various data to our clients from any location in the UK with cellular coverage, regardless of network – provided by our partner Mobius Networks.

During the trial period, we focused on temperature sensing. All five sensor packs ran for close to 4 weeks with no interruptions. We had one here in the KnowNow office, while the other four were deployed remotely, at two controlled locations. The flow of data was great to watch, with updates coming from each device whenever a change of 0.1° Celsius was detected; 30~70 updates per day per unit. In this respect, the devices proved both reliable and consistent: 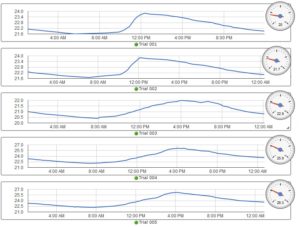 During the trial period we encountered no critical errors or hardware failures. However…

Given the granularity of the data, you would expect a high level of data use – and you’d be right! Unfortunately, all five far exceeded their individual data limit, a whopping 2MB, due to a combination of factors.
Firstly, in the event of connection loss, the sensor packs are designed to store and queue unsent updates for later simultaneous transmission. Previously, these queued packets were non-optimally packetized, resulting in small spikes of up to 50KB throughout the day. This was resolved in an OTA (Over-The-Air) programming update on the 19th of September.
Secondly, we are still seeing large (up to 100KB) spikes around midnight. Sadly, this accounts for the majority of the data usage as of late. We’ve had some trouble analyzing this problem, although I believe it’s most likely due to nightly update checks, which are performed alongside an automatic midnight reboot. Reducing the update interval to alleviate this problem is the simplest solution.

We’re currently investigating the most efficient way of expanding the sensor pack capabilities to include humidity, CO², gas and electricity whilst retaining the same level of quality you can see in the temperature readings. The eventual goal is to generate a comprehensive energy footprint of any location, and incentivize responsible energy use.

Watch this space for future updates on the project!