As it is National Apprenticeship  Week we asked our apprentice, Connor Moore to write a few lines about his experience of working with KnowNow over the last 6 weeks. Connor is undertaking a Tech Industry Gold apprenticeship via Highbury College, is KnowNow’s first apprentice and third full-time employee. 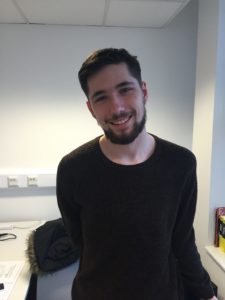 Hello. My name is Connor and I am the first Apprentice for an exciting start-up company called kn-i, otherwise known as KnowNow Information. During my first six weeks I have been involved in at least four different interesting projects. Two of these projects being based locally and the other two involving traveling – up to Canary Wharf to participate in the Level 39 Cognicity Challenge as well as going all the way up to Daresbury for a project called WUDoWUD.

What I’ve learnt as an apprentice

So far these projects have taught me various skills that I didn’t know I had. First of all I was able to sync up multiple sensors to a Raspberry pi and manage to get the MQTT broker to stream the data to a computer so we can visually see what is happening. I have also been learning how to use GitHub so I will be able to set up repositories. This skill will be valuable for when I am working on altering information and code on different websites.

While being up in Canary Wharf taking part in the Cognicity Challange, I have been studying and taking part in workshops that help all the participating companies achieve their maximum potential. These workshops have been talking a lot about B2B which I have learnt a great deal from just being up there. I have found out it is important to have these connections with different companies and be a team player. Even though winning the challange is a priority
but it is also having the opportunity to work with other great companies and maybe creating something immense in the future.

With the project WUDoWUD, I haven’t learnt a great deal of skills but I have learnt a lot of different ways to go around a problem and look at it from all different angles. There has been a problem with flooding and fords in the road becoming more of a problem each year. So what kn-i have decided to do is work closely with partners like IBM and try and find different ways to predict new fords forming as well as controlling the current ones. So far we have managed to use old rain fall data and predictive software to guess where there will be a new hazard. We have also been trying to use satelite imaging and work out how much silt has gathered up in the river over the years and working out when the council need to de-silt the rivers.

These first six weeks as KnowNow’s apprentice have been extremely exciting for me, learning all these different skills with such a great team to help me when it is needed. The projects have been really enjoyable and interesting with so much to do. Even though I’ve been here for such a short amount of time I have learnt a lot more than I had predicted and I am really happy about that. I am looking forward to carrying on my journey with kn-i learning new and exciting things.
Thank you for reading, Connor.