We spent part of last week building an dollshouse. Are we mad? Our home monitoring solution needed an easy and accessible way for people to visualise the resulting data. Rather than build a set of flashy dashboards we thought we would visualise it in 3D using a non-state of the art victorian toy – an IoT dollshouse. 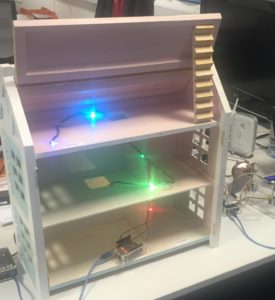 The Dolls House being built with the LED’s turned on.

BeatHouse – the start of the story

Companies are starting to realise that the data that they are creating through their business creates new value towards the company. At KnowNow Information we like to help these companies by consulting and providing data services that include data management and analytics.

Beat House is a project we have been working on which involves a passivhaus, a highly insulated pre-fabricated house, in this case in the beautiful setting of the South Downs National Park. Beat House is heated only through four towel rails and it is therefore important to find out the comfort levels of the occupants. 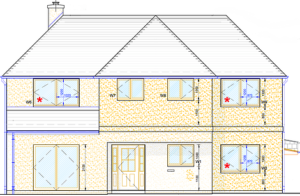 Beat House is owned by our good friend Mr David Pepper. What he has completed so far is demolishing the old house and construction is well under way for the new passivhaus. This is where we come into the mix. He wants us to create a dashboard that can display the different levels of comfort in each room. Comfort is measured from data gathered from a years worth of temperature both indoor and outdoor. The way we record this is by monitoring the temperature in each room when occupied and find out the specific temperatures and humidity that the tenants like via a simple app which just asks them whether they are comfortable at that time.

The IoT DollsHouse idea came from a need to visualise the data gathered from Beat House. The original plan for the Dolls House visualisation was going to be three separate LEDs for each room; Red, Green and Blue. This would indicate the comfort levels for the occupants. Red being too hot, Blue being too cold and Green is just the correct temperature to be comfortable at. When fiddling around with the LED idea, we had to power it using a Raspberry Pi. This became troublesome when we found out that some of the pins in our Pi did not work. With more research we found tiny LED’s from BangGood that allowed us to create a spectrum of light from two pins on the Raspberry Pi GPIO ports across a series of LED’s that allow you to alter the colour to gradually change from one colour to another. For example, instead of it going from Red to instantly Green, the Red will slowly transition into a Green so the user will know that it is cooling down.

Leaping from visualisation to actuation!

We built a demo version of some air vents that can be used in the home to move heat from one room to another.

How was it created? 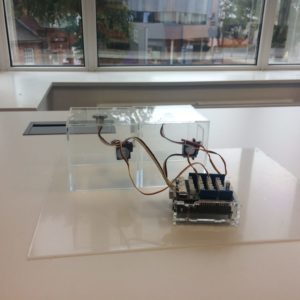 Demo of our actuations for Beathouse

We have a designated Friday every month called “Maker Friday”. This allows us to bring the ideas of a project alive. First of all we decided which materials we would need for the project. We needed to find the correct size box, 10cm³ and then the right texture, which was transparent. We ordered a couple and when they arrived we instantly worked on them, aligning them to each other we made some rough marks so there would be a visible mark to drill through. After the holes are drilled through and sanded down, we attach the servo motor inside of the box and create a small window for the servo motor.

How does it work?

There is a temperature sensor inside the box. The box simulates a room in the house. The temperature sensor gathers the data which is fed to the raspberry pi using node red. Once the temperature reaches the point where it will become uncomfortable for the occupants, the servo motor will be activated and the heat will pass to the next room. For example if the room is too hot, the motors will react to the heat and open up to vent the hot air out and the cool air in.

What have we done with the IoT Dollshouse since? 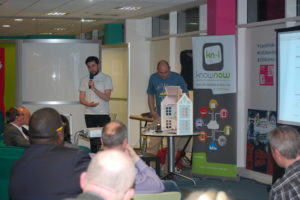 I took the IoT dollshouse along to the Thames Valley Internet of Things meet up and, along with Chris, we spoke about the process of working with our customer to develop the software and hardware required for the project. People were very interested to see a real live project which was actually being used in a customer situation. Lots of the people there had great ideas both how we could develop the idea further and also for potential commercial exploitation.

In my next blog update I will describe the process of building the demo for yourself.

Thanks for reading, I’d welcome suggestions on improving the project in the comments below, Connor.