G: If a city is starting to go down the smart cities route, and they’ve got the right vision for it, who do they need to get on board to help them with this?

C: I thought you were going to say who do they need to call and I was going to say Ghostbusters. Damn. It’s important that you do this for the people that are living and working in the city. You’re doing it for the city. Don’t forget that. It’s for the people that live, work, and play there. They are the reason you do stuff. For that reason, the first people that you need to pull through are your citizens. I would also look at doing things on a small scale because none of this is about technology. Technology is about a third of any project. Two-thirds of it are the human impact. How do you engage people?  How do you get them to use it? How do you get them to continually use it? How do you change what they used to do to what they now do? 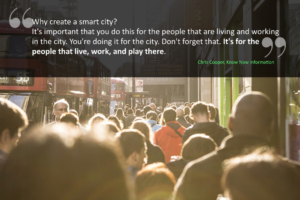 If you start using technology as a key part of doing that thing, it’s going to have its own issues if that thing now fails. An example of this would be if you’re taking a train home. The train gets cancelled. You’ve still got all those people in Waterloo trying to get back down to the South Coast, so where do they go?

If you’re a Smart City and you lose that communication piece, think about the consequences of, “If it’s gone, what do I do?” You have to start thinking about resilience and a belt and braces approach – i.e. robust & resilient. Do I have a non-digital fall back? If we stop doing hands-on care in the home for example, and this is something that we are going to have to do because there simply isn’t enough care professionals to handle the amount of people that need care, with our ageing and growing senile population.

We’re going to have to do more home monitoring. That won’t be monitored by a human, it will be monitored by a machine. The machine will monitor a set of conditions that the human has set up. Those conditions could be the temperature in the house; the amount of activity the person does; whether the kettle is going on between eight and nine – which says they’re awake. No kettle goes on for nine, no one’s been moving around the house, they might not be there. Check the front door. Did the front door go? Was there a CO2 trace declining and then rising over the day? Because you would see as they moved in and out. If none of that stuff is there, they might be on holiday. Check their phone. Where are they? Yeah, yeah, they’re not here, they’re in a foreign country. Let’s not worry about it.

If you have a series of checks, they did go through the front door, there hasn’t been any increase in CO2, so maybe they’re dead. Now what do I do? Sorry, very dramatic. Just dead, bye bye.

G: No in between.

C: You can’t just be subtly ill, you’re either dead or alive.

G: Dead or on holiday.

C: This is the computer-based world, there’s one condition. On or off, that’s it. Yeah, you’ve got to understand, and this is the thing about using multiple different data points to prove something is going on, it builds in that resilience from the start. It makes it so you’re not dependent on one information source for making a decision, but it also means that you’ve got to start investing, making different types of decisions on how you handle stuff. Who owns this thing? Actually, what we want to start thinking about is moving to a more sharing, sustainable world, where we don’t necessarily own the asset, we just buy or rent time or buy the experience that uses that asset.

Look at autonomous vehicles, why would you want your own autonomous vehicle? It’s autonomous, it does its own thing. You just buy the thirty-minute journey and then it just drops you off and it disappears and you buy another thirty-minute journey and if you’re lucky enough you get the same one you picked up, with your little initials saying, “Chris was here.” Or you start writing on all of them, and then it won’t matter, will it? Because you’ve always been there.

We are going to subtly change how we value stuff, because the information will give us that little bit of good-feeling buzz, I’ve just experienced that, or you’ll look back at it and go, “Yeah, that was really cool.” Your relationship will be with brands or organizations or people that you enjoy the experience or their service that they’re delivering you. Then you’ll be exchanging a bunch of information, and they’ll be looking for validation that you’re happy, and that might simply be you turning up the next day to buy their thing, or it could be more likes or smileys, or a great re-tweet or something.

What it will be is an ongoing experience, validation check, and using information to do that in a number of different areas and way.

G: With the home care situation, and the monitoring of the house, how far away do you feel we are from being able to something like that on a large scale?

C: We’re here already, and there are already organizations that provide care home monitoring. There’s a company called Nourish over in Dorset, they’re doing some great stuff with a home monitoring unit for the dementia community. It’s starting to build up a profile of information. I think we’re a good decade away from stuff that happens in the home, versus the conversation with your health care professionals, and I use the plural, not your doctor, it’s the professionals. A personal experience last year brought me in touch with the health care service, for someone that needs a lot of care and attention from different parts of the organisation, it’s a really inefficient beast.

The check and balances of a system that’s geared up for a non-IT centric way of working which means that we’re incredibly wasteful in our time and allocation. The talent shouldn’t be in a car going back to base, it should be sitting with a patient doing what they’re good at, which is patient care. 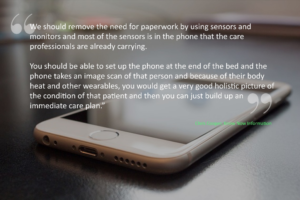 We should remove the need for paperwork by using sensors and monitors and most of the sensors are in the phone that the care professionals are already carrying. You should be able to set up the phone at the end of the bed and the phone takes an image scan of that person and because of their body heat and other wearables, you would get a very good holistic picture of the condition of that patient and then you can just build up an immediate care plan. You could just hand it over and then that could be exchanging any information with the patient because it’s always going to be patient centric. The patient is key so their family know what’s going on as well as the care professionals. It’s that side of the piece that is really behind.

We’ve already talked about the implausible security of stuff that’s connecting in home monitoring, which needs some work as well. There needs to be a standardisation, which is coming, of how things in the home talk to each other because where we’re getting to is the point where you’ll present something to your home, you’ll turn it on and it will start negotiating with the other devices in the home what it needs to do. You’ll be asked maybe 1 or 2 questions to put that thing you presented in its home to give its rules of engagement so where does it sit in the priority list. That could be a priority list in terms of power draw because you’ll be sharing energy within the home. It could be a list on, it could be a priority on communications so if I shout loud or I get heard more than anyone, this could be a personal alarm so that rides over everyone. If this goes off, all hell breaks loose and the fire brigade arrives, that’s what we want.

Whereas this other one could be, I’m just a bridge that’s just had the door left open. All I need to do, yes I’m going to have to work harder, just send me a text message. There’s a level of difference, not everyone’s treated the same. What we want as citizens is I buy it, it turns up, I press go and it just does it, you know, that Apple experience, you can knock on, yeah, yeah, yeah, terms and conditions, don’t worry about those.

C: Just press agree, I’ve sold you my mother. Bye, bye. Yeah, where we are. Look, you’re never going to stop evolving. We’re moving into a world of what people and business consultants call Six Sigma Lean, continuous service improvement. As you’ve done something and it’s being digitized and you’ve got use of that service, you’ll see that there are other things that you could do and want to do so you’ll go and do those but you can’t compare yourself to the old way of doing it because that’s now the new way of doing it, which is now the old way. The old way is gone and you’re now banking on doing it, this is how you do it so you’re going to see this series of step changes but you’ll never stop improving. There will never be a stable point, that is the old days gone.