Smart Cities advocate Chris Cooper is a co-founder of KnowNow Cities, who provide a design consulting service for those involved in smart cities. In this fourth part of our Future Watch series Chris opens up about the ingredients and leadership required to turn a city into a smart one.

G: We’re going to have to move on to your smart cities article. If you could just quickly explain what Know Now does for smart cities?

C: What we do with smart cities is we provide a design consulting service for people like architects, developers and local authorities with the idea that if you want to start connecting buildings, homes and workplaces to digital networks and having information flowing from one place to another, you need some type of design that makes sure the data goes where it’s supposed to.

The people accessing it are those that can. So it’s secure, it’s safe, it’s sustainable. It continues to do what it does on the tin because you’re starting to interact in between something physical that will have a lifespan of maybe 150, 200 years versus something that could have a lifespan of weeks or months or years depending on what it is.

Batteries, for example, the maximum I’ve seen a battery last was a wireless sensor one and is up to around 10 years.

The replacement rate for technology is slowing down, typically you are writing off on your books several laptops over two to three years. If you’re using technology from five years ago, that is probably out of date by several degrees in a number of areas. The replacement rate of technology versus what it’s having to do and what it has to support has got to be completely different in the way technology previously was.

The way to look at it is if you look at the military, people often say, “well the military systems seem to be antiquated.” That’s because when they first deployed they were using five-year-old components. Why are they using five-year-old components? Because they’ve been manufactured for a long time, there is an abundance of supply, they’re commoditized so they’re cheap and they tend not to fail because any problems have been engineered out, so it’s a very safe stable product. But the military 30-40 years made this stuff, so then faced by the technology they’re going, “whoa, in that many years’ time we won’t have even the components.” They often will buy the spare parts for the total lifespan of that technology that’s being deployed.

Translating to the Smart City 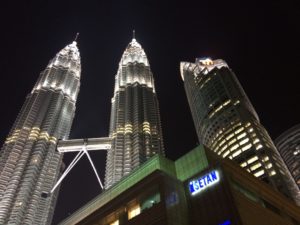 If we look at it in a smart-city state, we can’t necessarily do this, so we’ve got think about. How do I provide a replacement service for that sensor, for its power for its connectivity, when I’m going need access to that? I’m going to need to be able to do whatever operation I’m doing and also possibly keep the service that it was using up and running so the replacement’s time has got to be quick.

The other thing you might look at is, “well, actually it will never be replaced, it’s just going to be there forever.” Which is interesting because we don’t design things like that in technology, everything tends to have a fixed shelf life of a few years. We’re in a different world in smart cities, in how you manage it and how you bring all the data together and what we try and do is make sure those that are investing in it are making the right investment decisions and the technology choice as we often say, “it’s about designing for tomorrow but building for today”. Some of the projects you’re working on have a ten-year build plan and a likelihood is your first bit of technology you’ll replace twice by the time the last part of the development is being completed.

How do you manage all those moving parts, the road map that makes that happen, not breaking the bank but delivering a great digital experience for that place that’s just been set up? And that’s what we’re trying to do with technology.

The 5 ingredients of a Smart City

G: In your article, you say that there are five key ingredients for a smart city?

G: Do you feel that those could be perhaps slightly overwhelming to a city that is seems quite far away from being a smart city?

C: Oh my goodness, you should have seen the first list. No, if it is overwhelming for a place, there’s different starting points to make it less overwhelming. The first thing is to focus on the outcomes. So what do you want your place to be famous for? What do you want to change on the ground and then reverse-engineer how you achieve the outcome. Then that creates a set of requirements on the processes on the procedure side, as well as technology or information things that you may or may not need to make that happen.

Once you start having those two conversations, the rest of it will fall into place because of a natural consequence of your desire to not expose yourself to risk and to save money. Therefore you will settle on things like a standard because it guarantees some type of surety of it working. If it’s the standard, I know that it will work with this other thing that’s the standard opinion. The classic is the three-pin power plug, you put it into a socket, press ‘go’, power flows, standard, it works, it’s great. 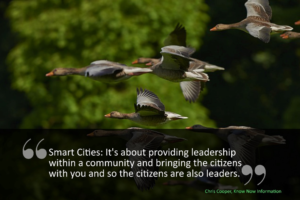 If you’ve got no one looking at outcomes, there’s probably no leadership and they’re probably not ready to become a smart place in the first place. I would argue that somewhere like Portsmouth, for example, my home city, because of its political makeup at this moment in time, a council with no real overall control, with some tough economic decisions as well, there’s very little cash to spare.

Bristol as a Smart City

Compare that to Bristol, where you’ve got single strong political leadership, you’ve got an elected mayor that said, “Yeah, this is the direction we’re travelling”. You’ve had some cheeky serendipity moments such as a broadband network laid in the city centre, which has unleashed massive connectivity benefits for the city centre businesses, creating an enterprise zone that’s driven innovation and jobs, and GBA creation that’s using the free broadband that was provided. As well as doing some other cool things around making the city data open. Setting outcomes of what they want to achieve, and then measuring that impact, and then crowing about how good they are.

Bristol’s gone from being a city, okay I went to university there so I’ve got a soft spot for the place, but it went from a city that was fairly down a hill, to one that’s vibrant, dynamic, and growing faster than some districts of London in terms of its technology business and the number of new businesses it’s creating.

G: What would you say are the real benefits to both the residents and the businesses that are within Bristol, for being part of this very forward-thinking smart city? 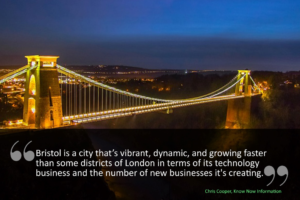 I would say let’s answer that question again after the mayoral election. Did George Ferguson get returned? Do people like his vision and the outcomes that he’s driving for the city and the area? Don’t forget as well, Bristol’s only got another year of being Bristol, and then it’s going to be devolved and be morphed into a bigger economic council unit.

One person’s vision disappears. It becomes a collective vision. It’ll be interesting to see whether that stands the test of time. Also, people are not happy about Bristol because you have got this leadership that’s making decisions around how people connect and use transport in the city. A big focus on public transport and removing cars, which has improved air quality but ruined congestion in certain parts. It’s now so slow to go around Bristol that you don’t want to drive in Bristol. We’ve always had congestion in cities. In the nineteenth century, a statement was made about the incredibly slow speed and poor pollution in the centre of London. People were talking about horse manure. It’s a question of fit-for-purpose infrastructure, and how you encourage people to connect and move around.